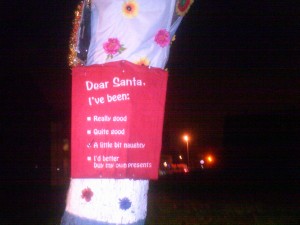 We thank God for his faithfulness and we than you all for your continued support.
This morning was wet as it was raining quite heavily during the night. Two members of our team were out on Friday Morning and prayed the day in and prayed for the streets. They were talking about how they are amazed by the faithfulness of God and His hand on this work. As they were waking around the streets that came across the tree with the picture of a letter for Santa (See above).

2 things really stood out to one member of the team.

1, They were asking the wrong person for the wrong gifts.

2, The location where they saw it.

The location where they saw it has been given the name “Death Row”, it is called that by the people that spend time there due to the amount of deaths that have happened there (mainly through overdoses). The flats have recently had some work done on them and they do look better but the darkness that covers the streets is still there. That is all too common of a mistake that we all do in one form or another. You don’t EVER put a bandage on a disease, you treat it at the source. If you put a bandage on it you are merely covering up the problem for a short period of time.

Shortly after they left they spoke about when Jesus spoke to the Samaritan woman (John 4: 1-26). Jesus went to a place that he should not have been in (Jews and Samaritans had no business (read verse 9)), he spoke to someone he had no business speaking to and he showed her love and he showed her who He was. That’s what we are doing out there on the outreach. Being where we are rarely welcomed, talking to people who are focused on sin, and showing them Jesus in all His Glory. They then met up with a working girl who looked cold and who was waiting for her dealer.

They had a brief chat and told her who they were and then they told her “YOU are too beautiful to do this work”. She then asked us to leave as her dealer was about to turn up…. Friends when we speak to working girls and compliment them on their looks, character, laugh etc, they change the subject and/or want us to leave. They are not used to having people compliment them, they are used to people treating them badly, but as long as we are running as a ministry, as long as we draw breath we will show them the love of God and we will show them respect.

We have noticed that more and more people are reading our blogs and showing us support and we thank you all for that, it means a great deal to us. We ask that you keep us in prayer and that you feel challenged and encouraged to reach out to people who are suffering in any way shape or form.

Latest Posts
Categories
Archives
This website uses cookies to improve your experience. We'll assume you're ok with this, but you can opt-out if you wish. Accept Reject Read More